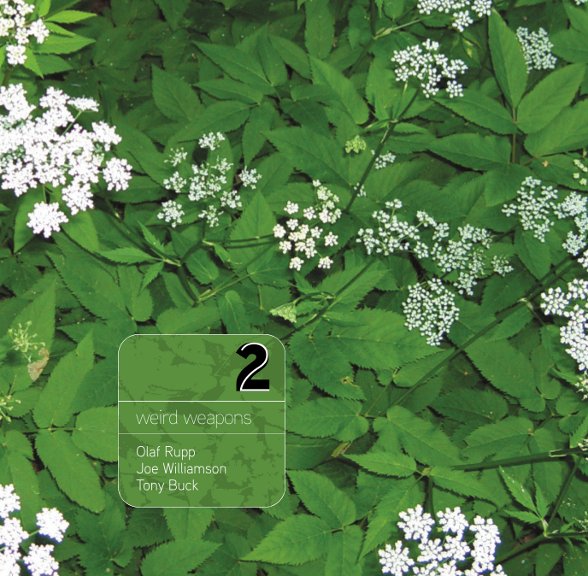 The trio play without any form of amplification or electronic interference, but their improvisation is so closely-miked that this certainly doesn't result in any delicate acoustic dappling. This is exhaustingly exciting music, without any let-up. It harnesses the thrill of spontaneous ignition. ... They cover a lot of space, with a very flooded, broad sound. Tony Buck's percussive work is a marvellously sustained blur of skin-and-metal tinkering, constantly inventive as he explores timbre, texture and tension at a frightening rate. He also finds time (and hands) to shake, scrape and seemingly drag large objects across a warehouse floor. Joe Williamson's bass has a gloriously full sound, enveloping the listener as he bows out thick swathes of deepness. Olaf Rupp is constantly flashing out filigree runs, little twists and embellishments. I'd swear that there are shards of Django Reinhardt in there somewhere...

OLAF RUPP guitar JOE WILLIAMSON double bass TONY BUCK percussion 1 - NAUGAHYDE - 33:54 2 - SPANDEX - 23:57 "Three musicians, from three different continents and three different backgrounds, happened to be living in Berlin a few years ago, and managed to make superb music together. Two extended dense improvisations by Rupp (guitar), Williamson (double bass) and Buck (percussion) without any amplification or electronics. 'I think the three of us in the trio try to achieve a kind of stillness through density and a certain degree of activity. Like the many complex colours and shadings in a pointillist painting that combine to form an impressionistic image, our playing is often very active and busy, while, in totality, creating a slowly shifting, almost three dimensional texture or soundscape." Tony Buck.
(full BBC review)

Creative Sources CS197 CD the bassist who now lives in Stockholm after stints in London, Berlin and Montreal, is matched with German guitarist Olaf Rupp and drummer Tony Buck, an Australian turned Berliner, for two extended selections of intuitive improv. No lounge guitar trio, this band creates sonic sparks that almost visibly fly every which way. Rupp’s constant, intense strumming often elasticizes into slurred fingering as Buck buzzes drumstick on cymbals, pops his toms, door-knocks his snares and rattles and reverberates any number of bells, chains and wood blocks for additional textures. Keeping the improvisations grounded is Williamson, who splays, stretches or saws upon his instrument’s strings, scroll and body wood when he’s not creating added continuum by slapping out pedal point resonation. On the nearly 30-minute “Buckram”, the three reach such a level of polyphonic coherence that the cumulative textures seem to ooze into every sonic space. Moving to the forefront then fading back into the ensemble, Rupp pinpoints jagged licks that eventually accelerate to stentorian multi-string runs, as Buck concentrates pitter-pattering and agitatedly clanking into tremolo whacks. Finally, a climax is reached, as Williamson’s multi-string variations, consisting of col legno strokes vibrating with a near-electronic pulse, push the three to a decisive conclusion. (By Ken Waxman- Jazzword )