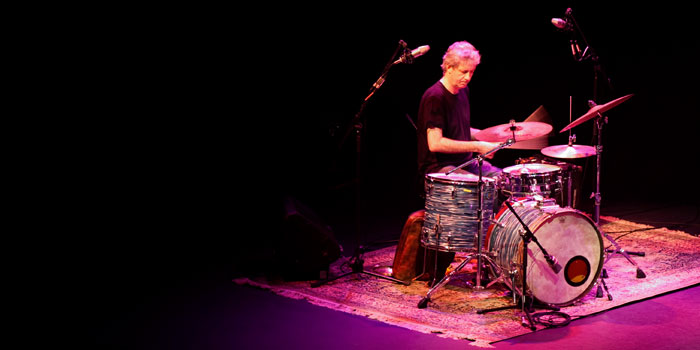 Tony Buck has been performing solo concerts for at least two decades. In the past, these performances have often incorporated live electronics and sampling, but, in the last 10 years or so, he has concentrated on creating live, improvised pieces using the drumkit, assorted small percussion instruments, guitar, video and other acoustic sound sources. (main Photo: Holimage)

"..an expertly measured evolution of atmosphere and sound " Chaindlk

“..surprisingly, transportingly beautiful... Tony Buck’s thinking on his craft has uncovered something and it's something enormous...” Brisbane's 4ZZZ:

"Unearth is casually expanding in space and as an acoustic picture slowly eats into the eyes and ears of the listener" Sonic Seducer:

“..imposing and polyphonic....do not miss it.” (Ondarock)
"..a remarkably considered structure ...moods of tension, peace and growth"... The Music

"...expansive...Buck’s grasp on the slow-evolving dynamic of the long- form composition is abundantly clear as the gradual transitions flows effortlessly..” Auralaggrivation.

“..A Multidimensional sound collage” The Wire

Unearth is the first solo recording from Australian born, Berlin based composer and drummer Tony Buck in 15 years.

With Unearth he delivers his most accomplished solo composition. Built across several years, the record is the culmination of his approaches to percussive intensive, pulse and explorations in compositional density. The architecture of this work is framed unsurprisingly around a core of percussion but also draws heavily on Buck’s less known interests in guitar, synthesiser and field recordings. These elements coalesce, haunting one another in an evasive manner that is inexorable, creating a slow moving dialogue of extreme dynamic interchange.

Operating at a pace not dissimilar to what one might expect from a recording by The Necks, Unearth explores a gradual, swelling sound mass, teeming with details, cast across long dynamic arcs. Seeming to move at a pace simultaneously brisk and unhurried, the piece represents an exploration of and meditation on, the duality and paradox of time itself. Moments of fragile and infinitesimal sounds contrast with droning, dense layers; melodic and harmonic elements play out against backgrounds of texture and noise. The pieces elements operate together to render an impressionistic multiverse of worlds, unfolding and wrapping themselves around one another. The work exists as a hierarchical sound mass; a sedimentary layering of intensities , unearthed and unearthly.

"This recording, made under rather unusual circumstances, represents to me one of those rare occasions when something special happened while the tape recorders were running. I had set out to record an improvised performance on a standard acoustic drum kit, albeit incorporating a few additional small drums, cymbals and little instruments. Ironically, it seems to take quite some time into the piece for a standard drum kit sound to emerge. I think however, it was the first time I had achieved, in a solo context, a kind of slowly evolving carpet of sound that changes little, but can, in some senses, be heard as a constantly moving kaleidoscope of small, restless events, coming and going, but rarely still. A chain reaction of colour in a sound world where nothing changes and nothing stays the same..."

The development of my live solo performance, inspired by the recording of the release Unearth, has initiated interesting and surprising areas of exploration and investigation for me.
Combining aspects of my work across various disciplines, (percussion, composition, improvisation, video production, guitar playing) and setting in motion new, hitherto unexplored areas of artistic practice such as staging, movement, installation and costumes, I find I am discovering and uncovering a new, personal Gesamtkunstwerk that brings together approaches and interests in ways I could not have predicted.

In this multi-disciplined performance I’ve been attempting to explore the sound and space of the performance venue in an organic and meditative way, while at the same time developing dense and dynamic sound and visual worlds.
“Like an installation piece..more like an atmosphere than a performance”*, the piece aims to operate at a multitude of levels simultaneously.. both an ambient installation and an engaging solo instrumental performance.

As a performer in this piece I want to be both casual but decisive, with a worker like functionality, conversely, a transmitter of spectacle - a ritualistic process -  both focused and present as well as ambiguous, anonymous and veiled into the fabric of the performance space.  In a sense, an absent presence. This has led to me to develop the costumes and masks which act as both a method of camouflage within the visual field and a sound making device, adding other layers of sonic material.

The installation exists as a self-contained environment; a self-generating sound environment, extremely simple in function but with, on occasion, unpredictable outcomes. My interventions reflecting both an improvised response to unexpected events and my agency as the director of the action.
Like the Unearth CD release, I play both percussion and guitar in this live version, interacting with the sound of the various machine driven instruments, which, at times I control and, on occasion, let loose to randomly generate a constantly shifting percussive accompaniment.
Musically, the piece combines insignificant small sounds and movements in contrast to immersive clatter and action,  paradoxically almost static but inexorably moving forward.

The video projected into the space, which envelopes both the performer and installations creates an ambience of nature and the elements - a transplanted magic-realism within which the piece unfolds.

Movement through and around the space is made essential through the accessing of the instruments and ‘workstations’. This movement, in turn, traced and registered by sound from the costume and interactions with the instruments themselves.
This whole process introduces an element of choreography into the work, which, when combined with video projections enveloping the space, creates an immersive environment within which the piece unfolds.
Both, and neither, performance,  theatre, dance, composition or improvisation.

I’d like the audience to feel they are witness to a piece being 'constructed' before their eyes; an intimate eves-dropping.

Both artistically and philosophically I see areas of differing interests in music, performance, composition. ritual, time and space coming together in ways that excite me and continue to show me possibilities for further development and research.

"... Drummer Tony Buck does not play drums. He is drums. As a magician, he is able to change one instrument out with the other in one flow.
Whiskers, connectors, round, rattle, saw blade.
With a creativity that would make Picasso jealous, he paints with rhythm.
…. A shaman drum is a slow process for a wild horse and cart. The drums rides, neighing, biting, again to rustle softly as quiet wind in a birch tree.
…. Buck shows how there are endless ways to play drums …. marking movement with drumstick on the edge; a circular saw blade in his hand snurres around the drum skin, so the serrations blades against metal edge.
Intrigued, I look at his magical bulging tool bag. What abundance of improvisation and new thinking!"
(review by Mikkeline Gudmand-Hoyer, Modkraft, Denmark)

"..Tony Buck takes his STEIM interactive Drum/Perc/Sampler system through it's paces, not that listening you'd know where the hell the sound was coming from most of the time. An interesting set of pieces by one of the more interesting drummers around on that noise/electronic/rock fringe, and the only one I can think of to use triggered samples in a way that really works...."  (Solo Live review..Chris Cutler, Recommended Reviews)

"..The first 15 minutes of this 40 minute piece sound like someone left the record button on while The Necks' Tony Buck was tidying his studio. Ever so gradually, this transforms onto a frenetic yet somehow delicate drum frenzy. Not for the faint hearted, persistant listening will be rewarded by the feeling that you have in fact heard something slightly magical yet undeniably insane..." (S_C_U_B_A review Juice Magazine)

"... Tony Buck's powerful "Honey/Tongues" also begins with pulsating gong work, but swiftly moves into a rich welter of stroked and pummeled percussion that mutates in an almost liquid fashion throughout the piece. A section toward the middle contains more overt stick playing than one might expect but Buck, by manipulating the timbre of the struck items and generating a woody, semi-tonal quality, maintains a level of interest above and apart from the rhythms employed. Still, the general surging character of "Honey/Tongues" is never far away, a strong ebb and flow, push and pull, that carries the piece forward with irresistible conviction. It eventually billows outward, scraped gongs emitting near-elephantine roars, pounded metal erupting and dissipating into the air..."
(Berlin Drums review Rigobert Dittmann, Bad Alchemy)

The Shape of Things to Come
(self-released)