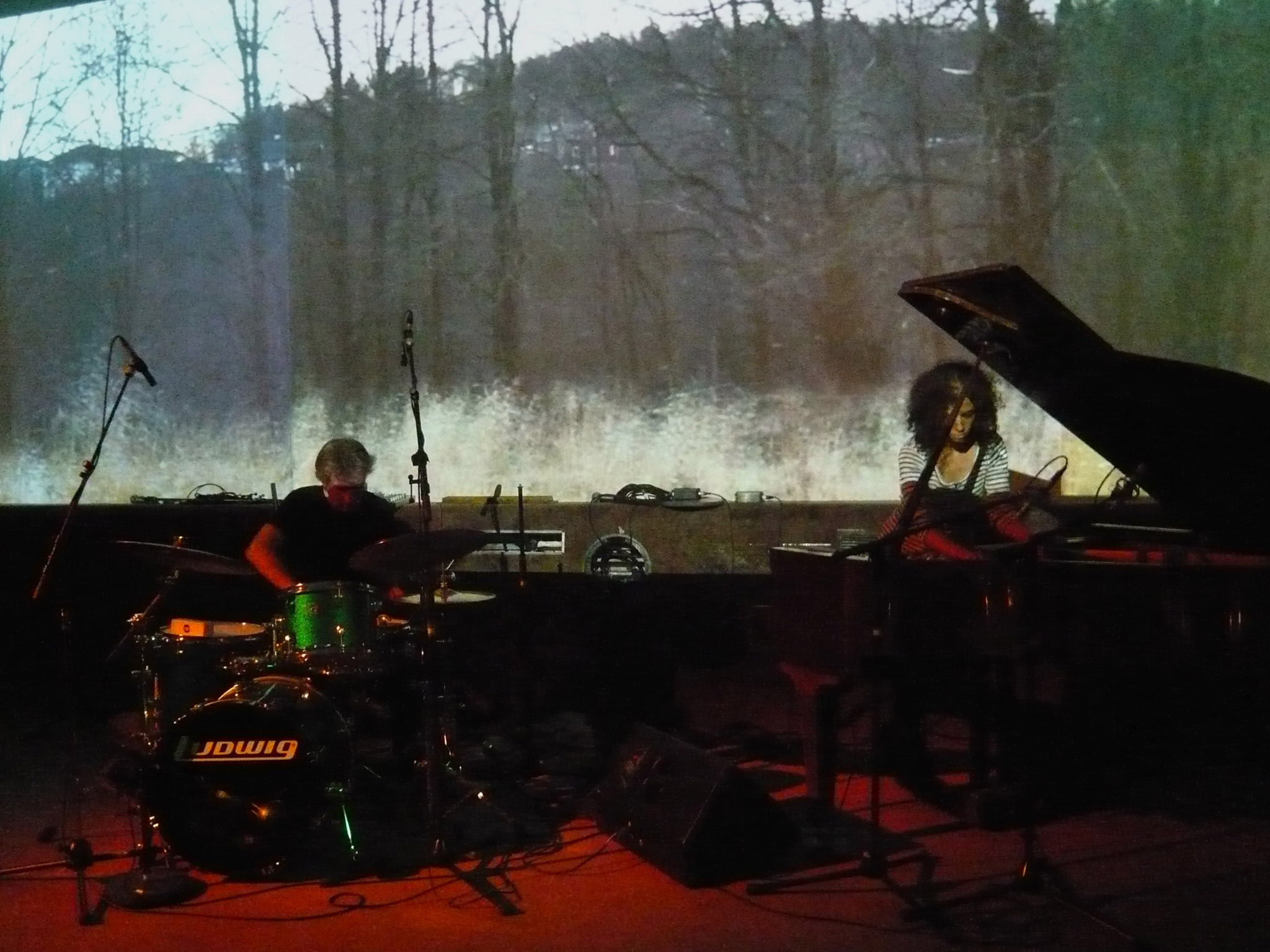 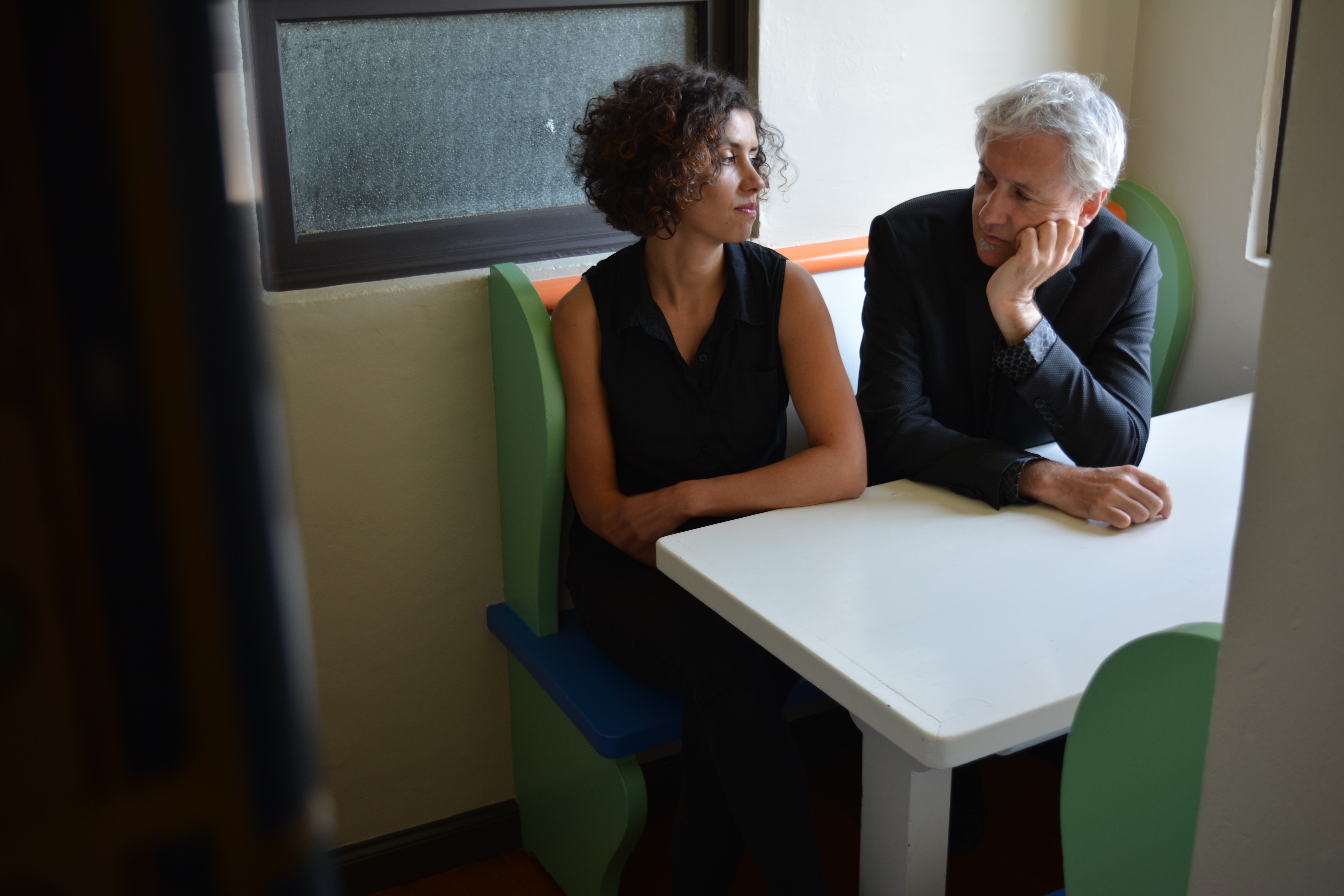 Spill is the Berlin-based duo of Magda Mayas on piano and clavinet and Tony Buck on drums/percussion, formed in 2002. They have, to date released 4 albums as the duo (see below), and have collaborated with John Butcher as the group Vellum on the UnSounds label release Plume as well as with American bassist Damon Smith on the CD Spill Plus (on the Nuscope label).
Over the last 5 years or so, they have also developed a collaborative relationship with Melbourne guitarist David Brown, performing numerous times in Australia and throughout Europe.
For a three month period in the summer 2016, SPILL were together on an artist residence program at Villa Aurora in Los Angeles.
Nov 2017 and April 2019 saw Tony join Magda for periods during her residency at Montalvo Arts Center in California, where they have worked on new SPILL recordings and performance ideas. Returning to Berlin following this productive period SPILL released a new record Stereo on Berlin based label, Corvo Reocrds.
2022 finds SPILL release their fifth album Mycelium, continuing their relationship with Corvo records. In many ways this new record continues and furthers areas developed on the previous release, dealing with studio layering, processing and contrasting acoustic spaces.
In autumn 2022 SPILL will embark on a small tour celebrating their 20 years of music making, performing with special guests Olaf Rupp, Angharad Davies, Aimeé Theriot-Ramos, Christine Abdelnour, David Stackenäs and John Butcher.

It’s improvised music, where spacialisation is as an important compositional tool as instrument selection. Sounds ring out and reverberate from across the stereo field. Crescendos build with earth shattering significance, enveloping the piece before dispersing providing space before the next incursion forward. It’s curious, despite the diversity of timbres and periodic flurries, given its stop start nature there’s never really much feeling of momentum. The question remains, where are we? And where are we going? The answer is of course why focus on such insignificant questions? Shut up and embrace the moment.

"Spill is the Berlin-based duo of Magda Mayas on piano and Tony Buck on drums, and Stockholm Syndrome features two long tracks recorded in concert in Helsinki and Oslo in 2010. While we've all heard pianos played percussively, it's much rarer to hear someone play the drums with as much attention to melody as Buck. High-pitched bowed cymbals form harmonic sequences with brushed straw, wood on wood popping and bass thump drags. This duo isn't the kind where one person challenges and relents and waits for their partner to do the same. The friction they generate is instead the result of being so continuously and seamlessly intertwined that conflagrations of star-burning intensity naturally appear at every other twist. Mayas has a spectacularly gifted ear for timing, and translates it into her hands on the keys, giving Buck the freedom to create more and more unusual combinations of melody and rhythm. This duo is one of those rare groups where not only is the instrumentation perfectly matched, but the style with which the musicians approach their instruments is so personal that it's astonishing how well it all comes together."

The next night’s highlight was the duet by Tony Buck (percussion) and Magda Mayas (prepared piano). Harmonics seeped from all that they struck, scraped and wrung out producing a luscious ebb and flow of complex layers. Lost in the evocations of this piece, I imagined at one point that I was hearing the everyday sounds of a small town, notated and reproduced in musical form. Eyes closed, I lost track of instrument identity sometimes and had to look back at the stage to understand exactly what was creating these sounds so full of cadence, resonance and melody.

(Magda Mayas & Tony Buck / Gold): There’s just 36 minutes of music here, but every second of it is interesting. Pianist Mayas plays chunky, bell-like clusters that seem to observe a slowly evolving musical logic, neither obviously melodic nor conventionally harmonic. Drummer Buck for the most part works a parallel path, working busily but delicately round his kit. The opening minutes of “mercury machine” are full of light, skittering figures on the metal parts and big, damped clusters on the piano, some of them hand-damped inside the sound box, I suspect. It opens out thereafter, but there’s no attempt here to emulate the iconic piano and drum duos of the past – Coltrane and Ali, Taylor and Roach. Mayas and Buck create their own intimate languages and in the process deliver something very special and exactly the right length.

What is the link between jazz and cats? Is it the animal's free spirit, its independence and unpredictability? Is it to do with its sense of precision and purpose? In any case, the cat staring from the cover of this album looks exactly like my cat when I was a kid.
Luckily that has no influence on my appreciation of this music, a duet between pianist Magda Mayas and drummer Tony Buck, both based in Berlin and performing as a duo since 2003. This is their third recording - next to a trio with Damon Smith on bass - and it contains two 20' minute tracks, designed for a vinyl production, called "Magnetic Island" and "Sway".
The two musicians create sound environments with pre-recorded elements from live performances with multi-speaker and multi-layered audio, on which they act and react. The music expands slowly and with precision. Despite the various layers, the texture is light and fragile. Every sound counts and has a value of its own in a larger space that still resonates with the traces of previous sounds. The calmness betrays an inherent intensity of contrast and anticipation. The variety of techniques they use to approach their instruments may be resulting in noise according to some, but in fact it's the exact opposite. It is sensual, elegant and refined. Once you immerse yourself in this beautiful and carefully crafted sonic universe, everything else will sound like vulgar noise afterwards.
We can only hope that the duo will release with a higher frequency in the future.
... and yes, they are free-spirited, independent minds with a high dose of unpredictability, as well as a sense of precision and purpose. Like cats. But you already expected this, of course.

„....Improvised duos have lots of pitfalls to avoid: levels of alertness and/or talent can be too disparate, the speed of interaction may never sync, one person can try too hard to push the music in a certain direction, etc. But from the very first sounds they made and all the way to the final tones of the encore, these two were in perfect balance throughout. Tightly intertwined at the level of both the sonic material they pursued and the rhythmic pointillism with which they went about their journey, they stunned me into wide-eyed, open-mouthed attention. Even their minuscule pauses overlapped. And when they didn’t, it was as if they were just making room to highlight and frame what the other was doing. Pianos are naturally percussive instruments, and especially so when attacked from the inside, and this piano/drum duo exploited that overlap of sonority with exquisite concentration. Buck and Mayas were completely wrapped up inside each other’s sonics. There was no mimicry from one sound to the next, but everything they did was complementary. The spectrum of sounds used wasn’t especially large, but the context within which they played the sounds made the narrative difference between delicate and violent absolutely apparent and meaningful. A taut, highly successful combo.“

Spill is a duo of Magda Mayas (piano, clavinet, tiger organ, harmonium, objects and preparations) and Tony Buck (drums, cymbals gongs, bells, tabla, percussion). In San Francisco and Berlin they recorded these four lengthy pieces of heavily layered sounds, but no doubt all of this played in real time. Both of them are masters in creating clusters of music on their own instruments, using all fours it seems to create their sound. Each of these pieces is a delight to hear, rich in sonic excess, rich in details thereof. Spacious music with clusters of organ sounds, scraping of the inside of the piano, the objects on cymbals and hi-hats, culminating in the brutal free rock force of ‘Sermon’ at the end of this CD. A long but fruitful trip. (FdW) monotyperecords.com

In the Kiasma theatre I was soon pushed the rest of the way down by the duo of drummer Tony Buck and pianist Magda Mayas. Their organically chaotic blend of prepared piano and exquisitely textured percussion won me over with its dynamic warmth and seismically shifting mutations. Performing live, they made it look free and easy, but these two virtuosos are at the top of their game, cheerfully walking through the door that John Cage opened so long ago.